2022 Rivian R1T Electric Pickup Truck: Everything We Know So Far!. The 2022 Rivian R1T electric pickup truck is pertaining to the markets. According to various experts, it is the R1T model that will form a rivalry with the Tesla Cybertruck. As you know, Ford F-150 Electric and GMC Hummer EV are also ready to dominate the electric truck segment. When the R1T model was revealed, Rivian promised impressive performances with questionable driving range figures.

It seems like the manufacturer is serious about those claims and promises. Moreover, Rivian plans to release its R1S SUV and brand-new Amazon delivery van. A few days ago, Rivian also unveiled impressive warranty coverage. The sales will begin later in 2022 and here’s what you need to know.

The arrival of the all-electric pickup truck, 2022 Rivian R1T, is just around the corner. According to the manufacturer, the R1T should be released at the end of this year, aiming to be one of the first EV trucks offered on the market. If you didn’t know, the main rival Tesla Cybertruck is postponed for the following year, meaning that the throne space is still unoccupied.

American automaker and automotive technology company Rivian recently released a new batch of photos, and we must admit, the new R1T looks futuristic. They also promise impressive performances thanks to four separate electric motors producing 750 horsepower and 829 lb-ft of torque. 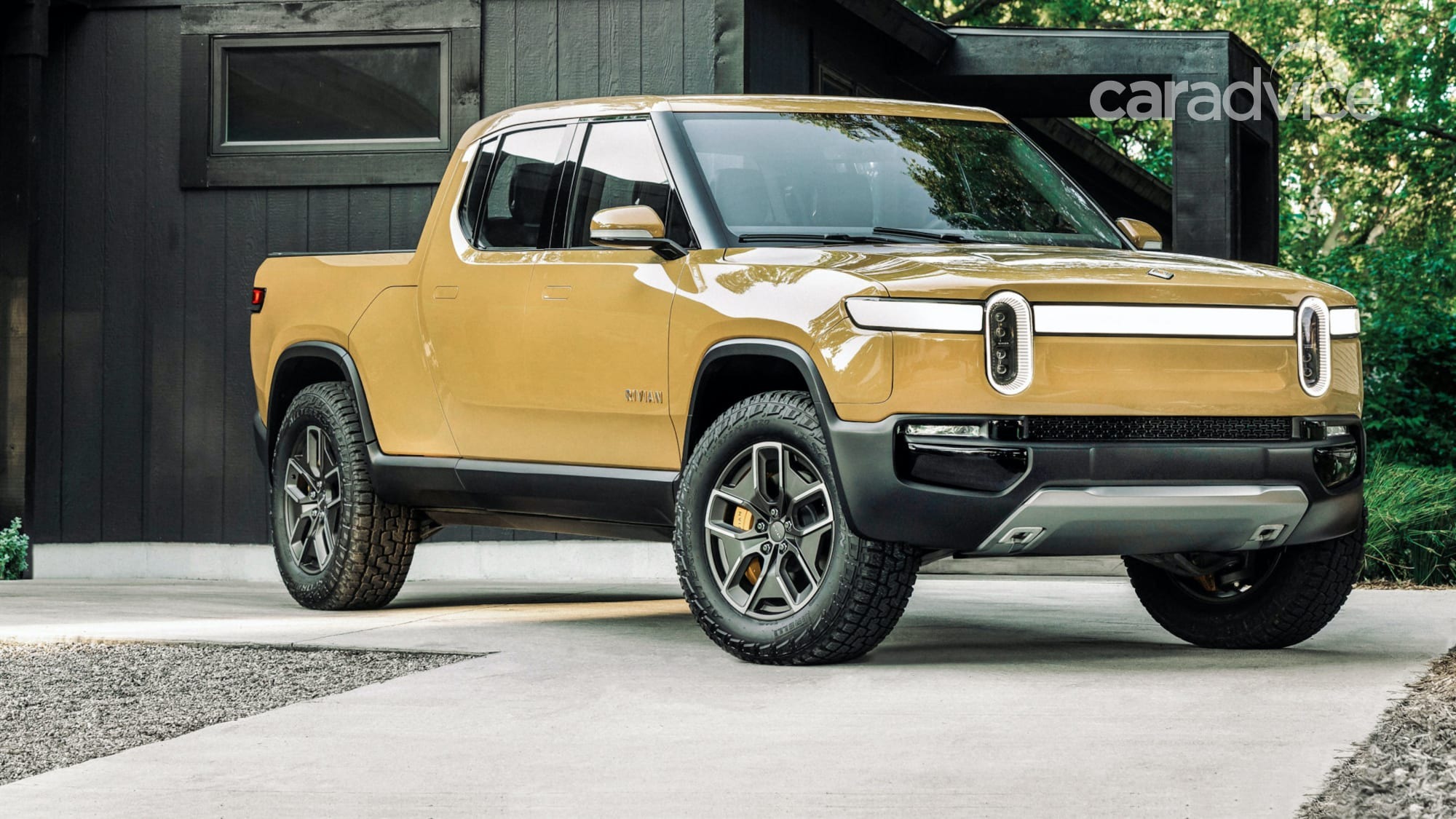 The upcoming 2022 Rivian R1T pickup truck will definitively lure many buyers with its futuristic look. It features a horizontal light bar that serves as both a daytime running light and a charge-level indicator when it is on charging. The same design is present on the taillights.

The Rivian R1T also comes with air suspension that enables a wide range of heights. According to the manufacturer, this truck offers excellent off-roading abilities thanks to an incredible 14.1 inches of ground clearance. Rivian stated that the new truck could water up to 42.3 inches in depth. 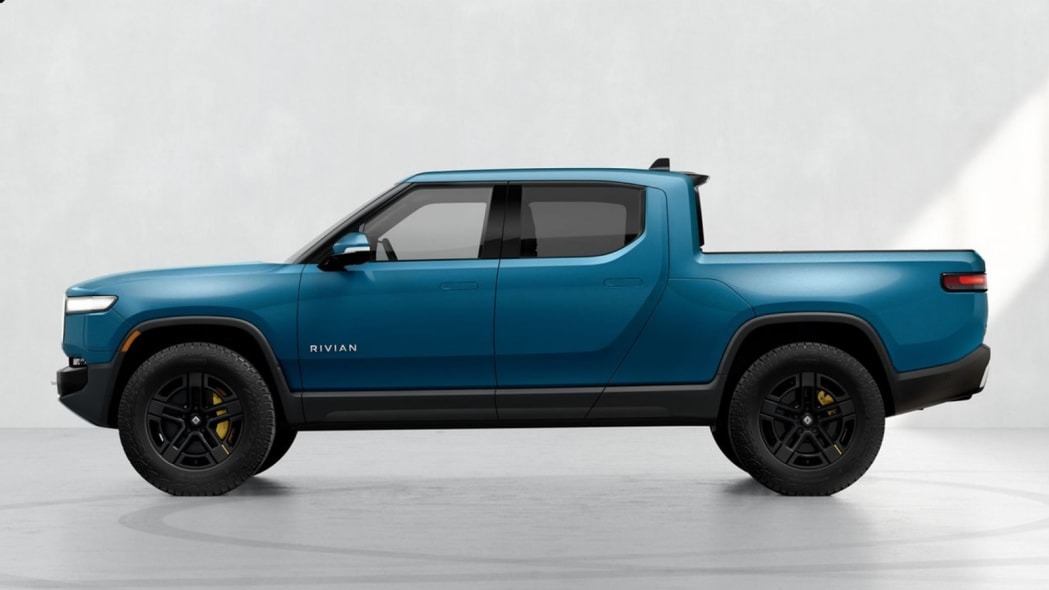 Rivian hasn’t given much details about features, but we should expect Apple CarPlay, Android Auto, and an onboard Wi-Fi hotspot to be standard. The company also confirms, that the R1T will also have Level 3 autonomy, giving you the ability to drive without the need for the hands-on steering wheel.

The all-new 2022 Rivian R1T is a pickup truck that uses four separate motors, one at each wheel. Thanks to that, R1T gets instant power and the ability to vary traction needs in the blink of an eye. According to the company, the motors are rated to produce up to 750 horsepower and 829 lb-ft of torque. These are absolutely amazing figures, resulting in acceleration from 0-60 mph in three seconds.

As the main rival Cybertruck, the R1T should also be offered with three different battery variants. This model will be available from the official information with eider the 105 kWh, 135 kWh, and 180 kWh battery. The entry-level model will use a 105-kWh battery providing 230 miles of range, while the 135-kWh version 300 miles. The last and the largest 180 kWh battery is the game changer with its range of 400 miles. Towing figure is also available, and the R1T can tow up to 11,000 pounds.

In terms of performance, the new 2022 Rivian R1T will arrive with a lot of power and a great driving range. There will be three different battery sizes. The largest 180-kWh battery pack will develop around 750 horsepower and up to 830 lb-ft of torque. It is the range-topping variant with 400 miles of all-electric driving range and it has about 11,000 pounds of towing capacity.

On the other hand, the base version comes with a smaller 105-kWh battery pack. This model delivers 230 miles of range, which is also an admirable driving range. The mid-range trim level uses a 135-kWh battery with 300 miles of range. Rivian said the R1T pickup truck will accelerate from 0 to 60 mph in 3.0 seconds.

What About Exterior Design?

The upcoming 2022 Rivian R1T comes with an SUV-like exterior design. We think the styling looks impressive and definitely more upright than the Tesla Cybertruck. A first teaser video is already available and we think the R1T model looks attractive and modern. Impressions are very positive, especially because R1T comes with a more traditional appearance. You won’t find futuristic and innovative things, which is a good thing in our opinion. Higher ride and sporty stance are other pluses, along with the unique lighting system and astonishing wheels.

The interior of the 2022 Rivian R1T also offers a lot of modern stuff. That includes impressive cabin design, larger displays, and very premium ambient lighting. Moreover, Rivian offers a unique steering wheel and a high level of comfort. Still, the interior will depart from the interior of the original concept.

Again, the cabin layout is usual and not as minimalistic or futuristic as some other electric pickup trucks. The manufacturer promised vegan interior will plenty of standard features and impressive safety ratings. Rivian will reveal more details in the coming weeks.

The brand-new 2022 Rivian R1T model will compete with Tesla Cybertruck. However, Cybertruck will arrive at a more affordable starting price. Whatsoever, the new Cybertruck will cost $40,000 and the R1T pickup truck will start at $65,000, basically. The sales will begin later this year, but the official launch date is not available at the moment. Rivian announced the eight-year/175,000-mile warranty that covers electric motors and battery packs.